On June 28, 2013 at 4:53 a.m., Colin Angus and I completed our quest to row the Yukon River from Whitehorse to Dawson City in Canada.  We had two primary goals:  to set a human-powered speed record for this stretch of the river and to demonstrate the unique capability of a rowboat to maintain high speeds indefinitely in long-distance racing.  Due to unexpected conditions on Lake Laberge, we didn’t quite reach the first goal, but we certainly met the second one.

The only records for this 440-mile stretch of the river have been set in the course of the Yukon River Quest, a paddle race that is held every year.  However, our own effort was not in any way connected to or recognized by the Yukon River Quest because (for reasons that are unclear) they do not allow rowboats. Now that we’ve shown the effectiveness of our system, perhaps their perspective will change!

We started at 2:03 am on June 26, 10 hours earlier than the Yukon River Quest racers. Our total elapsed time to cover the 440-mile stretch between Whitehorse and Dawson City was just over two days (50 hours and 50 minutes).  Although we did not beat the time of 49 hours 32-minutes posted by a 6-person canoe in 2008, we did set the following records (updated 2017):

1.   Our time is the fastest posted in the last 9 years.
2.   Our time is the 4th fastest in history.
3.    We have the second fastest time in history for a two-person team.
4.   Our time was faster than any that has ever been posted by a two-person canoe.
5.    More than 700 teams have raced down the Yukon since 2001, putting us in the top 0.5%;
6.   We made the fastest unsupported journey from Whitehorse to Dawson City (meaning that, unlike the Yukon River Quest contestants, we were provided with no food, shelter, or water along the way).
7.   And finally, we are the only recorded team that has ever made the voyage between Whitehorse and Dawson City without once stepping ashore.

We missed breaking the overall human-powered record by 1 hour 18 minutes, but this was primarily due to the fact that we lost more than an hour and a half on Lake Laberge due to strong headwinds.  At one point so much water was coming into the boat from waves that we could only just keep up with the bailing.  In addition, water splashing over the bow soaked our sleeping bag and us, which, when coupled with the wind, made for a cold transit for the guy not rowing.  Had conditions been calm on Lake Laberge, we would have comfortably achieved our goal of setting a human-powered speed record.

We departed from Whitehorse at 2:03 a.m. in order to reach the infamous 33-mile-long lake in the early morning hours, historically the calmest time.  Unfortunately, we received the strongest winds of the day.  When the Yukon River Quest contestants came through later that afternoon, the winds were calm.  Weather data indicates that winds are generally at their peak in the afternoon, so it was just bad luck for us.

Our boat was a sixteen-foot Oxford Wherry weighing in at only about 50 pounds (about 455 pounds with sleeping platform, oars, riggers, gear and us) that was designed and built by Colin Angus.  Although its performance and weight are similar to a Kevlar racing canoe, it also incorporates elements of traditional rowing boats for aesthetic reasons.  For propulsion, we utilized a sliding seat rowing system and carbon fiber oars.  While the boat offers similar performance to a racing canoe, sliding seat rowing is more powerful than paddling, which allows it to go significantly faster than canoes or kayaks (assuming cargo, passenger weight, etc. are the same).  We packed food high in calories—candy, cookies, sardines, tuna, and freeze-dried meals that we prepared on a Primus Eta Solo stove.  The person on the off shift was able to relax on a Thermarest pad while eating, sleeping and rehydrating.

While this two-person system is used in larger offshore rowing boats, it is unique in small boats and one of the most effective ways to maintain speed over long distances.  On flat water without current, we feel as though we could sustain a continuous speed of between 3.5-5 miles per hour–-for one day or one month.   For shorter distances this system would be a disadvantage as it would be more efficient for both crew members to be rowing together–faster but ultimately unsustainable.  If we were competing in a race such as the Yukon River Quest that incorporates periodic rest breaks, our strategy would be to row in tandem, giving us a speed about 30% faster relative to the water.  The approximate two days that it takes to voyage from Whitehorse to Dawson City is just long enough to allow our two-person alternating rowing system to be advantageous and give us an edge over continuous dual paddling/rowing.

The main disadvantage of being in a rowboat is the rear vantage point.  This was a huge challenge for us on the Yukon, as it is a “braided” river with many islands and channels.  The continuous forward visibility afforded by canoes and kayaks is a significant asset in interpreting the subtle clues offered by the river.  To overcome the challenge of facing backwards, we had to use a combination of a rear-view mirror mounted on sunglasses, continuous body/head turning, and assistance from the “resting” person (mostly Colin advising me on where to go!).

The infamous Five Finger Rapids posed no problem for our boat.  I woke Colin up for the rapids—he yawned, sat down on the rowing seat, and expertly navigated the rapids in about three strokes. We passed through these turbulent waters at about five a.m., and while Colin wasn’t worried about capsizing, he was concerned about getting soaked and further chilled.  Fortunately, due to the stability of the boat and Colin’s skill, no more than four drops of water landed inside the boat.  (Nine years ago Colin passed through these same rapids in a canoe and was thoroughly drenched by the standing waves.)  Fortunately, oars offer infinitely more control and power than a paddle, and we were able to delicately thread the boat through the rapids, thus avoiding the larger waves and staying dry.  Our sleeping bag had been previously soaked by rain showers and wave trains, but it had dried in the sun, and we really appreciated the fact that it was still dry downstream of Five Finger rapids. 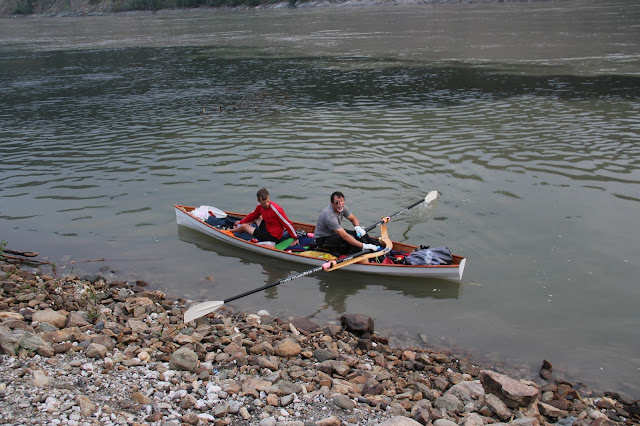 And so we finally arrived in Dawson City at 4:53 a.m. on June 28.  We were feeling a bit tired but in good physical shape, and we were sure we would have had no problem maintaining our two-hours-on two-hours-off routine for another month.  The boat performed flawlessly—tracking well through the turbulent waters and providing ample stability.  No repairs or adjustments were required for the duration of our quest.  While we didn’t break the overall human-powered record, we were thrilled to have set the records mentioned above, as well as to have demonstrated the speed and power of the two-person rowboat design that allows for non-stop progress with one rower and a resting partner.

Finally, a huge thanks to a number of people who made this adventure possible:  to Colin’s wife Julie for all her support and help; to my wife Ann for driving our car 330 miles from Whitehorse to Dawson City shortly after being released from the hospital with strict instructions not to drive for at least 24 hours; and to Sylvain Turcotte (of Boreale Biking in Whitehorse), Tara McCauley (Dawson City), and John Ewing (also of Dawson City) who graciously agreed to serve as witnesses to our departure and arrival in the middle of the night, even though they had never met us before.

A few words on the Yukon River conditions:

The distance between Whitehorse and Dawson City was 433 miles according to our Garmin GPS.  This is at variance with a reported distance of 440 miles in several souces.
As it turned out, we found the current just out of Whitehorse to be among the swiftest—allowing us to move at about 9.5 to 10 mph.  The current had slowed down considerably by the time we reached Lake Laberge, where there was almost no current.  We were greeted by a stiff north wind that caused waves about a foot high, and by the time we completed our 33-mile transit of the lake, we had dropped down to an overall speed of 5.1 mph.

From Lake Laberge to the Teslin River, the current gradually got faster and faster, and we hit our highest speeds during the 50-mile stretch that began about 18 miles downstream of Lake Laberge.  During that section we averaged about 10 mph and reached a peak speed of 13.5 mph with a current of about 9.5 mph.  For most of the distance on the Yukon River, we could only maintain a speed of about 8 mph, making our overall average speed 8.6 mph—putting us short of the 9 mph needed to break the record.  With an average rowing rate of 4 mph, this meant that the majority of the current was in the range of 4-5 mph, very much short of the 8 mph current we had been led to expect, and also short of the 5-7 mph current we had read about in a number of sources.  It was not until we hit the confluence of the White River that we encountered a significant increase in current speed.  About 60 miles south of Dawson City we started to sprint, reaching speeds of 10 to 12 mph, but the current unexpectedly slowed down again about 20 miles from the finish line.

Except for the confluence with the White River, we never experienced an increase in current flow at any of the intersections with other rivers.  In fact, due to the breadth of the Yukon River, it was never clear that we were ever passing through a confluence.

The Five Fingers rapids were very easy, staying to the righthand side and just to the left of the easternmost standing wave.   We approached the standing wave nearly broadside, and then with 2-3 strokes, we moved to the left and shot right past it, with no water or spray in the boat.

Map of Yukon Row
Posted by Dr. Steven Price at 2:04 PM No comments:

Dr. Steven Price
Steven C. Price has a Ph.D. from the University of California, Davis, in plant genetics (1980). He has worked at the Standard Oil Company, where he was Group Leader of the Biotechnology Program; Director of Patenting and Licensing at Iowa State University; Director of University-Industry Relations at the University of Wisconsin, Madison; CEO/President of the non-Profit Public Intellectual Property Advisors in Washington D.C., and is presently the Associate Vice President for Technology Development at Oklahoma State University. He also works with the United States Department of Commerce, and has taught technology transfer courses around the world including Morocco, Egypt, Pakistan, Jordan, Republic of Georgia, Armenia, Turkey, Singapore, and Vietnam. Steve is interested in endurance athletics, and holds two world records: 1.) in 2009 he set the world record for number of pull-ups in 24 hours (3,175), and 2.) in 2012 he set the world record for meters rowed on an erg machine in 24 hours (210,000 meters) for his age and weight category.